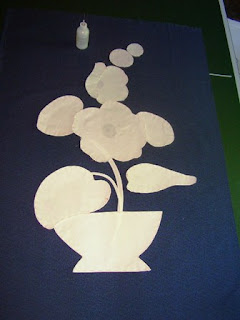 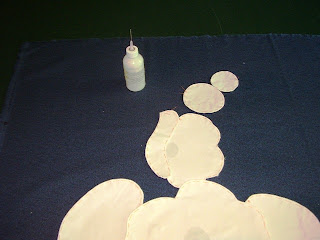 August 1, 2009
Project 1: Hollyhocks
Okay, so for the first project, I decided to go with something that I’ve been kicking around in my head for some time. It’s a small wall hanging (24” x 36” or so) to go above my bed. I desperately need art for my house, but can’t afford what I really want, so until my ship comes in, it’s more quilts for me!

I decided to go white with a funky dark blue to match my funky blue walls. No time like the present to jump outside my comfort zone! I plan on adding some cream embroidered accents on the white appliqué to give it some definition, but not enough to detract from the whiteness of it. I can’t decide if it will have wide, white borders to mimic mat board or not. Thank heavens I don’t have to make every decision now.

Hollyhocks is a Kansas City Star pattern from the Memory Bouquet Quilt, first published in 1930.

The first shot shows the entire appliqué glued down with Roxanne’s Glue Baste. I like Roxanne’s because of that long, thin applicator. You can get just a tiny dot of glue where you want it.

The second shot shows the appliqué shapes up close. I’m trying a new appliqué method. We’ll see how it goes…