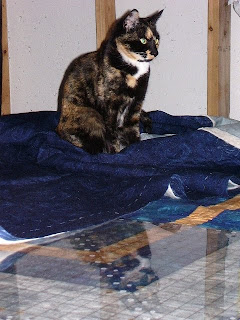 Isn't anything more harrowing than attaching the darn binding to the quilt? I don't mind sewing it down, but getting it on is the part that I like least in quiltmaking - especially large quilts like this (86" x 90"ish). This quilt is from a BOM I developed for Heritage Fine Fabrics in Belton, Mo. It's called Missouri Crossroads as a play on Kansas Troubles over in Bennington, Kansas. I thought it was funny anyhow!

The quilt is 17 blocks that are all crossing in some way. What's different about this BOM is I included the finishing instructions as you go along so you're not stuck with 17 blocks at the end of the year and still have to put it all together. It's done after the 12th month. Response has been good and I plan on designing another quilt like this for next year.

Anyhow, back to binding. I have a ping pong table that I use as a cutting table. I highly recommend them! The kids only played ping pong for exactly 23 days after Christmas 2 years ago, so I don't feel bad re-purposing their entertainment for mine! I can spread out the largest of quilts to square them up for binding. Of course, the cat (Bunny, short for Ubuntu) thinks it's great fun to be in the center of the action! Once she was shooed away, I got the quilt squared up using my wonderful, 20" square ruler! (The most decadent quilting tool I own.)Then I went to get the binding that I made before I sent the quilt to the quilters. Good thinking, huh? Well, you'd think so except for the fact that it's about 100" too short and I don't have more of that fabric! So it's off to LQS this afternoon to get more.
Labels: Missouri Crossroads process