And that means stinky shoes! 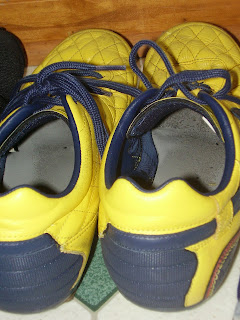 And a crowded mud room! 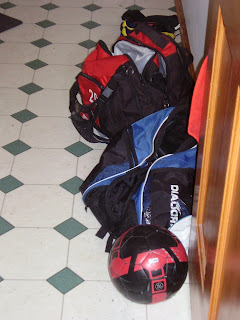 Actually, this picture is one bag and pair of shoes short. My son has his first HS JV game tonight and took his gear with him this morning. After what seems like endless practices, I'm so glad the games are starting! He's goalie, which is way too much pressure on a soccer mom, but he's fearless and thrives on the pressure, so I try to stay calm and carry on. My daughter is in competitive soccer, which is just as bad, but I'm learning to cope! I never had the opportunity to play soccer as a kid, so I'm glad my kids do. I absolutely love the sport!

But, despite the hours spent driving and waiting for practices to end, I do manage to keep the sewing machine buzzing. And as I mentioned a few days ago, I have found some more time in my schedule this fall to finish up, start new and just play with my quilts!

Over the weekend, I decided to work on the Heritage Sampler Quilts and finish them up. I have the top done except borders on the black and have the white one all pieced, what I can anyhow, until I finish up the last three blocks. Of course those are the least motivating three blocks left, which is why they were left to the last in the first place!

The black is for Son #1. His personality seems to suit the dark background. That sounds wrong. He's a happy kid, he just is so serious most of the time.

And the same goes for Son #2, who the white is for. He just seems to "match" the white!

I taught this quilt as a class all last year - three blocks a month. I offered the kit in two colorways - background black or white. And since I really tend to bite off more than I can chew, I decided to make both colorways. I was determined to keep up with the students, and it worked out pretty well. But, what I found out though that surprised me was that it's nearly impossible to make one quilt exactly the same twice! There are tons of variations and differences. I know you can't tell unless I point them out, but in some cases I decided that a block was too hard to make twice, so I swapped out another block for it. Or sometimes I messed up the placement of the elements in one of the blocks but not the other - or my favorite, not reading my own directions and using the wrong colors completely!

I plan on having two different quilters quilt them to see what they come up with to further make them "different" from each other. Funny how the same can be so different!

BTW, do you notice the studs on the wall behind my design wall and the black plastic "walls" with holes in them (thanks to the kids) and a ping pong table cutting table? Yep, that's my sewing room - an unfinished basement! I love looking at the beautiful sewing spaces other people have! Maybe some day I'll have one for myself - or maybe not!