I'm getting ready for a big announcement (hint, hint - could it be a new book!?) so I need to do a bit of fall cleaning to get ready.  What that means for you is a big bargain on my first book - Grapefruit Juice and Sugar. Published in 2005, (Wow! Can it be that long ago already?) it was the culmination of a lot of hopes and dreams for a career in quilt publishing. It's the book that started my journey and one I'm still proud of to this day!

Grapefruit Juice and Sugar is a nostalgic look at my grandmother's pattern collection she started in 1929 and continued until her death in 1977. Each quilt is based on one of the patterns she so carefully cut out of the newspaper and pasted into her scrapbook. I made the quilts she always dreamed of making! I accompanied each quilt with a memory I have of Grandma.

And it was from one of those memories that the book got it's name.

The following is an excerpt from the book:

How to Drink Grapefruit Juice Without Making a Sour Face

Grandma was a whiz at making do. One story her children remember is about grapefruit juice and sugar. in the early 1930s, when money was tight, some people accepted government help. Grandma's neighbors were one such family. As part of the  program, they received some surplus food, called commodities.

The neighbor received some food through the program that her children wouldn't eat, so she shared some with Grandma. One of those items was grapefruit juice. Well, Grandma knew that a little bit of sugar makes many thing much better, including the bitter tang of grapefruit juice. Her children loved the improved juice. One day, Grandma made the mistake of telling the neighbor what she did to get her kids to drink it , and they never received the grapefruit juice again.


Here's another quilt from the book - it's the Honey Bee block from August 24, 1929. It's my most favorite old-time block because my mom made my baby quilt from it! This version is called Bubblegum in the Pantry (you'll have to get the book to read why it's called that!). I decided to embroider the wings of the bees because I thought that tiny applique would be too challenging. And it probably would have, but that embroidery took forever! I took it to cub scout meetings, soccer practices, the carpool line - everywhere I had a few minutes to work on it, I did! But in the end, it's so darn cute, the time was worth it!


In honor of this first book, I'm offering it for sale for $5 a copy - and that includes an autograph! Follow this link (www.42quilts.bigcartel.com). 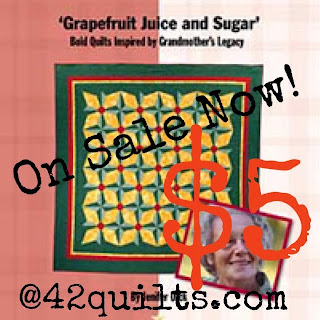